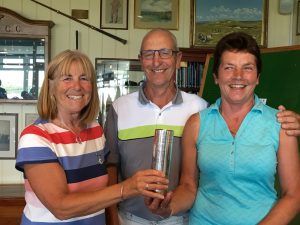 82 mixed married couples competed for the Flitch Vase on a glorious day at Royal North Devon on Friday 5th July. Thanks to the wonderful support from RND everything went well with all competitors enjoying their day. The winners from Okehampton were Sue and David Stanbury with a magnificent foursomes score of 46 points. They managed an eagle on a par 5 and two 2’s in achieving this score. This was the first DCVLGA competition where we introduced a best visitor prize, this was won by Lee and Peter Bristow from Saunton with 38 points. The best RND players were Peter and Nuala Brummitt with 43 points.