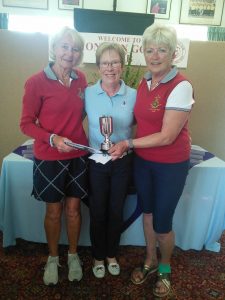 Tania Wickham and Pauline Marais from Royal North Devon were the winners of the DCVLGA Killard Leavy Cup at Honiton on 5th September 2019, scoring 34 points.  In total there were 136 ladies taking part in the competition which included the Autumn Foursomes.  Full results can be found in the ‘Results’ section of the website.  The weather was fine, but rather windy at times, and many of the ladies reported disappointing scores when they handed in their cards.  The highest score of the day was 35 which was scored by Kaye Cowley and Bev Turton from Churston and they won first prize in the Autumn Foursomes.